China: Keep the Use of Wild Animals

Zhong Nanshan, the leading expert of epidemiology in China, has mentioned in 2010 that 60 % to nearly 80 % of the contemporary epidemic diseases are caused by zoonoses. [1] Although there is no confirmed theory of the origin of COVID-19 virus, many reports point fingers to the Huanan Seafood Wholesale Market in Wuhan City in China. On January 26 this year, the Chinese government announced a temporary ban on wild animal trade and suggested its people to stay away from the “game”. On February 24, the Standing Committee of the National People’s Congress (NPC) passed the “Decision to Comprehensively Prohibit the Illegal Trade of Wild Animals, Break the Bad Habit of Excessive Consumption of Wild Animals, and Effectively Secure the Life and Health of the People”(hereafter referred to as the Decision), banning the use of wild animals, whether from the nature or captive breeding. However, which animals are officially considered as wild animals in the Decision? The use of wild animals has been a critical issue in public health, animal welfare, biology, economy, culture, etc., but the details are often overlooked.

First of all, the biggest use of wild animals isn’t for food but for fur in wild animal farming in China. The destiny of minks, foxes, and raccoon dogs has not changed a bit, and farming them poses a potential threat for the outbreak of zoonoses. According to government reports, there were around 40 million skins from these animals (minks, foxes, and raccoon dogs) in 2019. [2] In a study in 2016, the number of workers in the fur industry was 7.6 millions, which exceeds half of the total number of workers in all wild animal industry, including fur, medicine, food, entertainment and pet, and experiment purposes. The direct revenue of fur industry is RMB 400 billion dollars, and the total revenue of all wild animals in the country is RMB 520 billion dollars. The significance of the fur industry is evident. The urgency of this industry can’t be stressed enough, yet people hardly pay any attention to it during the COVID-19 period (see chart below) [3].

Before the outbreak of coronavirus this time, fur animals were usually sold for food after they were skinned or sold for other meats and sneaked into the market. [4] The number of skinned animals in fur industry in China has reached its peak in 2015, which was 95 millions, and the bodies weighed up to 1.24 million tons. [5] It is fairly easy to find the recipe for cooking raccoon dog on the Internet, and some farmers also admitted that they had eaten those bodies. It is also a common practice that the farmers use animal’s dead bodies to feed their offsprings, which is literally feeding on their own family; all of these practices pose huge threat to public health. Taking mink encephalopathy as an example, it is a lesion stemmed from spongiform encephalopathies, similar to mad cow disease. In order to prevent encephalopathy caused by minks eating their own species, farmers would trade different animal bodies to feed the animals, yet this is not the suitable solution at all, and if the industry do not change their practices, it is almost impossible to prevent the bodies entering the human market. [6]

Zoonotic Diseases And Biological Threats Still Around the Corner

The farmer’s health condition is also usually ignored in the practice of wild animal farming. For example, Weihai City in Shandong Province is one of the major farming area for minks, and among 68 local confirmed cases of new bunyavirus, 22 of them have had mink farming history or been bitten by minks. [7] Under the COVID-19 virus that last for months, the wildlife trade was banned, so some businesses were unwilling to keep raising the animals; therefore, burying animals alive has been witnessed in many places. As a result, local animal groups have proposed measures on how to handle these wild animals: relieving them if they are local, and relocating them in zoos if they are imported. [8] On one hand, innocent animal lives deserved to be valued and, on the other hand, as long as animals are farmed, there is a chance that these animals could escape. Several fur farms which raise raccoon dogs from the East Asia in European countries have paid huge price for this. [9] Releasing them recklessly can also cause negative impact; the releasing of silver foxes, blue foxes, which are not native species in China, has appeared on the news for multiple times in the past. In most cases, these animals had no guarantee of their welfare, and in turn, the environment was damaged, thus it is lose-lose. [10]

The Devil In The Detail

In my point of view, that there are three main loopholes in the banning of game in China and the establishment of the Decision. First, wild animals used for fur, medicine, animal experiment, entertainment and pet are not restricted under such ban. Second, aquatic wild animals are not included in the ban at all. Third, the wild animals referred to in the Decision do not include species in National Index of the Genetic Resources of Livestock and Poultry (hereafter referred to as the Index). [11] 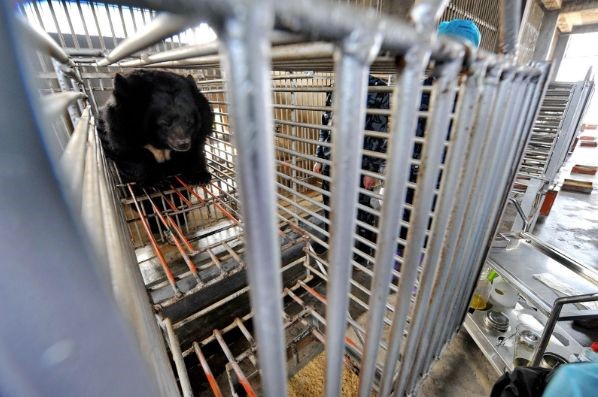 On April 8 this year, the Draft for Comments of National Index of the Genetic Resources of Livestock and Poultry was published; minks, foxes, raccoon dogs were listed under “non-edible special livestock and poultry”. Yet, these highly sensitive nocturnal wild animals have developed serious stereotyped movements with high tendency to eat their own offsprings in captivated situations; along with the farming of oversized blue fox, which the media has dubbed as “monster fox”, these evidence shows that animal welfare is an impossible idea in captivity. Now, more than a dozen countries have banned fur farming, and several cities have also prohibited the trade of fur products. [12] Regarding aquatic wild animals, reports have been seen to discuss profoundly about the ecological problems resulting from common frog industry, further details won’t be covered in this article.[13] Last, until May 8, Draft for Comments of the Index has been asking comments from the general public. Once the final Index is out, it would be regarded as the “white list” for species that humans can use. This would not only impact all related businesses and millions of animals but also matter to the people, the environment in China, and even the entire world. It is a high-stakes crisis. [14]

In 2020, when all humans in the world suffer due to coronavirus, animals in China have also come to the cross point of their destiny. Recently, the regulation banning eating cats and dogs, Shenzhen Special Economic Zone on Prohibition of Eating Wild Animals (media dubbed as Shenzhen Wildlife Ban), has received great public attention. The draft was proposed at the end of February and passed on March 31 in the Shenzhen Municipal People’s Congress, and it will be implemented since May 1. [15] As the fifth largest city in China, Shenzhen is the first area to ban eating cats and dogs, and this will definitely affect the dog meat consumption in Guangdong /Guangxi areas as well as the entire country. [16] The Decision and The Wildlife Ban are both major milestones in the history; meanwhile, in Guangdong, Hebei and Jiangxi Province, authorities are also formulating regulations that adapts better to modern civilization. [17] Draft for Comments of the Index has mentioned that dog “is not suitable to be listed under livestock and poultry”. Does this mean there is a slight chance of hope that China will ban dog eating one day? It is also worth our attention. [18]

Looking at the overall impact of coronavirus on the wild animal industry, we should be positive about the determination and effectiveness of the Chinese government, yet we can’t be overly optimistic, especially for the reason that a Chinese medicine that contains bear bile has recently been listed as a recommended treatment for coronavirus. It shows that the government still had unfitting knowledge about the hidden danger of using wild animals. [19]

How we treat wild animals is more complicated than just “to eat, or not to eat”. For example, fur nowadays is usually used for decoration rather than a necessity in winter. [20] Implementing a complete ban and offering proper compensation to help farmers to transit to other businesses would be the only way out in such circumstance; otherwise, we might not be too far away from the next pandemic outbreak. [21]

[2] China Leather Industry Association (2020). Statistical Report on the Production of Skins of Mink, Fox and Raccoon Dog in China

[5] “These animal bodies were collected by vendors. Some grind them to make animal food, and a big part of them was sold for other kinds of meat in the market. Without proper inspection, these meats are very likely to raise food safety issues”. Chinese Academy of Engineering (2017). China Sustainable Development Strategy Report on Wild Animal Farming

[6] Qingdao Evening News (2011, March 15). “Zeng Xianwei told the reporter that after the foxes, minks, raccoon dog are skinned, the rest of the meat would be used to feed their own baby foxes, minks, raccoon dogs. The animals are fully utilized and recycled in the process. ‘Sometimes, fox meat could be fed to minks or raccoon dog, and the other way around, so that feeding the body to another species could prevent intraspecies transmission and save cost.’ They can sell the skin of the fox and eat its meat. Zeng Xianwei and his partners eat foxes, too.”Injecting Stimulants For Foxes So They Could Grow Two Weeks Faster; Fox Meat Is Used To Feed Foxes Themselves After Skinning & video of cooking raccoon dog

[8] “The Heaven of Natural” Team (2020, April 1). How To Handle Largely Unused Wild Animals And Farmed Animals Due To Coronavirus

[9] European fur farms introduced raccoon dogs from the East Asia. After the carnivorous raccoon dog escaped to the wild, they became the alien invasive species that everyone has targeted. Now, only Finnish and Polish fur farms are allowed to raise raccoon dog legally, and all other countries have not lifted the ban due to biological concern. Refer to  Lung Yuan-Chih: The Contemporary Disguises Of Raccoon Dogs (2020, January 15)

[11] Prof. Qian Yefang in School of Law and Politics, Zhejiang Sci-Tech University explained to me as follows, “In 2008, China published Index of the Genetic Resources of Livestock and Poultry (hereafter as the Index) for the first time and it included the Livestock and Poultry that the Ministry of Agriculture and Rural Affairs has then recognized. The Index is declared, evaluated, and updated irregularly, and until now, the MARA has not yet to publish the inclusive Index, and the ministry expressed that they had gained full knowledge of the species and will publish a complete Index and will keep renewing it from time to time.” Apr. 8, 2020, the publication of Draft for Comments of National Index of the Genetic Resources of Livestock and Poultry.

[16] Reference to the poll “How Do You See On The Banning Of Eating Dog In Shenzhen?” starting from Apr. 2, 2020; comparing to dog, cat meat consumption is rarer in China.

[18] Reference to “About Dog” in Appendix 2, Draft for Comments of National Index of the Genetic Resources of Livestock and Poultry: “due to civilization progress and people’s attention and concern for animal protection, dog has been redefined as companion animal. Dog is internationally recognized as non-food animal, and it is improper to be categorized under livestock and poultry.”

[20] Reference to studies and report on ACTAsia. Full text of China’s fur trade and its position in the global fur industry.

[21] One can refer to Zhang Ke. Quit Early How Wild Animal Farmers Can Withdraw From The Industry (2020, March 24)